Superfluid, DailyPay and the Future of Programmable Money

UPDATE: with the rapid growth Solana, this is also applicable to MeanFi and Stream Flow. Protocols that are building money streaming and payment solutions on Solana.

Since the implementation of some form of value representing the medium of exchange, instant settlement and transfer of that value has been the holy grail of the transactional process. This phenomenon has been experimented with for centuries and we still see changes and iterations of it in consumer preferences (PayPal, Venmo, ACH, BNPL, etc.) today. While these innovations tackle hard problems and should be celebrated, they fail to provide actual, real-time access and transfer of funds sans the user's willingness to pay fees, which they overwhelmingly decline to do.Furthermore, the lack of pressure applied to incumbents and their complacency in the natural boundaries of the traditional financial system, has lead these innovations to fall short of the idea of real-time transfer taken to its logical extreme (payroll and real-time transfer of value). One recent fintech darling attempts this, as DailyPay allows users to pay a fee for wages earned that day or a collection of wages across many days eliminating the ridiculous bi-weekly/monthly payroll. Again though, we can do better than fixed-access fees and the user friction of opening an app, facilitating the same transfer each day. Enter Superfluid, a protocol built on Ethereum (ETH) that allows the programmable transfer of money, in real-time, for a one-time upfront fee (that will become marginal as we'll see). Superfluid has the potential to crack the code for real-time, down to the second payments (streams) that could create a seismic shift in the way value is transferred. Exploring Superfluid, and any crypto protocol in general, becomes orders of magnitude easier when there is a clear "normal" company for comparison. Noting this, we'll explore the potential of Superfluid and programmable money with a comparison to the newly minted fintech unicorn DailyPay, before evaluating future use cases and the possible down-stream effects of programmable money flows.

Superfluid v. DailyPay and the Product-Market Fit of Instant Flows

There is no better comparison for an up-and-coming crypto protocol than that of a fresh fintech unicorn. From a recent Barron's profile of DailyPay and their newest funding round, "the round valued DailyPay at over $1 billion, giving unicorn status to the fintech." Let's explore the clear investor excitement and product-market fit DailyPay has found to get a sense of the potential impact daily cash flows can create for both employees and employers. DailyPay markets itself as, "...building a new financial system that starts with on-demand pay so that money is always in the right place at the right time, for everyone. Our best in-class, trusted, first-of-its-kind technology platform dynamically changes how money moves - changing pay, for good." Their core product, as you can infer from their company name, is the ability of an employee to access their earnings, or part of their earnings, daily for a flat fee. A recent fintech unicorn and certain neobank offerings that drive growth are one end of the spectrum, but the demand and benefits of earlier access to pay are represented at the other end of the spectrum as well. Even the incumbent, national banks are seeing demand for these services. From an Insider Intelligence eMarketer article, "Huntington is the latest US incumbent bank to offer early paycheck access. Two other incumbents recently unveiled the same feature. Fifth Third Bank announced last week that it's making its own feature, also called EarlyPay, available to all of its customers after a selective rollout. Capital One also recently unveiled its own version - both it and Fifth Third also use a two-day maximum." So, we have incumbent banks offering services called EarlyPay and a fintech unicorn named DailyPay. The product-market fit is clear before even digging into the underlying KPIs (key performance indicators) that can be seen on DailyPay's site. According to their metrics, they boast some impressive statistics that clearly benefit the employer and in addition to the benefits and increased capital efficiency employees receive. Below are two screenshots from an excellent article on the Earned Wage Access (EWA) ecosystem, along with survey results conducted by DailyPay representing the benefits that the employer-employee relationship receives. 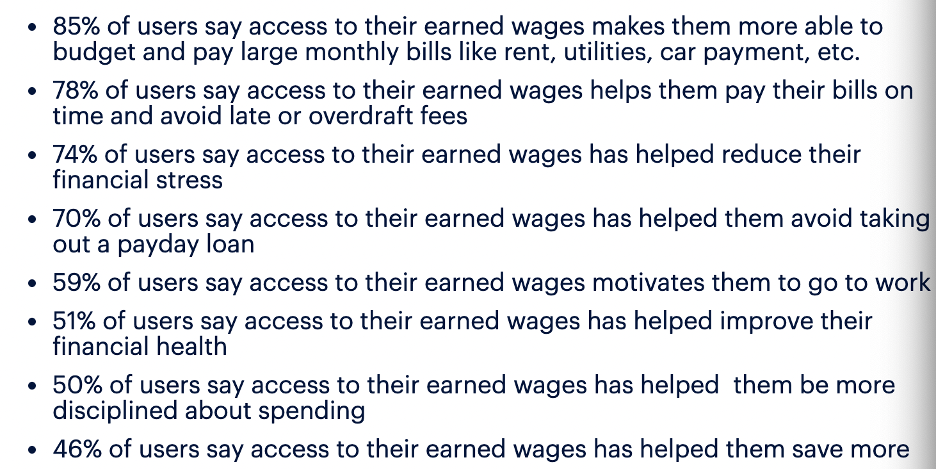 DailyPay's funding round and recent growth shouldn't come as a surprise as we're witnessing the convergence of a few key trends. 73 million Americans working hourly while unemployment is still recovering from COVID, the recent BNPL (buy now, pay later) ecosystem, users demanding easier transfer and access to funds and employers increasing difficulty in hiring. Clearly, the access to quicker pay could alleviate some of this stress for everyone involved in the employment ecosystem. Further solidifying this point and the product-market fit is a recent Hacker News post I saw a few mornings ago. "Hi HN, we're Karina and Andres of Monto (https://monto.mx/). We give employees of our affiliated companies access to their earned wages 24/7...With Monto users can pay for basic services on time, avoiding penalties." While all of the above is incredibly important, we can look to the future to eliminate the daily fee burden, provide ~global~ access to these services, and further increase the benefits to not only the employee-employer relationship, but the broad transfer of value between any two parties when applying these concepts to a blockchain based, crypto structure. Back to Superfluid.

Superfluid describes the benefits it provides to users on its site (MetaMask connection required) as follows, "handle subscriptions, salaries, rewards, and any composable stream of value, with continuous settlement and per-second netting for extreme capital efficiency." Any composable stream of value, with continuous settlement and per-second netting is the key subset of the protocol's description. Superfluid is a protocol built on the Ethereum network which gives it access to a few things that DailyPay and the other recent innovations can't access. Notably, these are extreme composability with other protocols, down to the second streams of value, and arbitrarily complex, code verifiable logic that operates on a borderless crypto scale. Potential future users would not need a siloed fintech company built in their specific jurisdiction as Superfluid inherits global, permisionless, 24/7 access from the broader crypto movement. A few examples of what this means were laid out eloquently by Kyle Samani of MultiCoin Capital in an article that can be read here. Two of the examples of the composability and interoperability referenced above that he alludes to are, "stream $5 per hour to Bob as long as I am receiving at least $10 per hour" and "Bob receives a stream of $20 per hour from his employer, streams $5 to pay back a loan, streams $10 of it into a savings account, pays a few subscriptions, and commits the rest to buying ETH every second." Powerful. These examples highlight the potential of the protocol to easily take a portion of an incoming streamed payment and redirect it to payments outstanding and/or dollar cost average into preferred assets and indices. This same idea can be applied to any other company, entity, or person with a ETH wallet address and presents the excitement and infinite potential of extreme capital efficiency and real-time monitoring of flows. Furthermore, the increased composability increases overall liquidity and capital efficiency for the entire economic system and is not limited to the previously mentioned employer-employee relationship. Another bonus is that it would greatly benefit the mid-to-low salary and hourly workers in the socioeconomic class that demands the service the most.

Current, Potential Use Cases and the Land of Infinite Possibilities 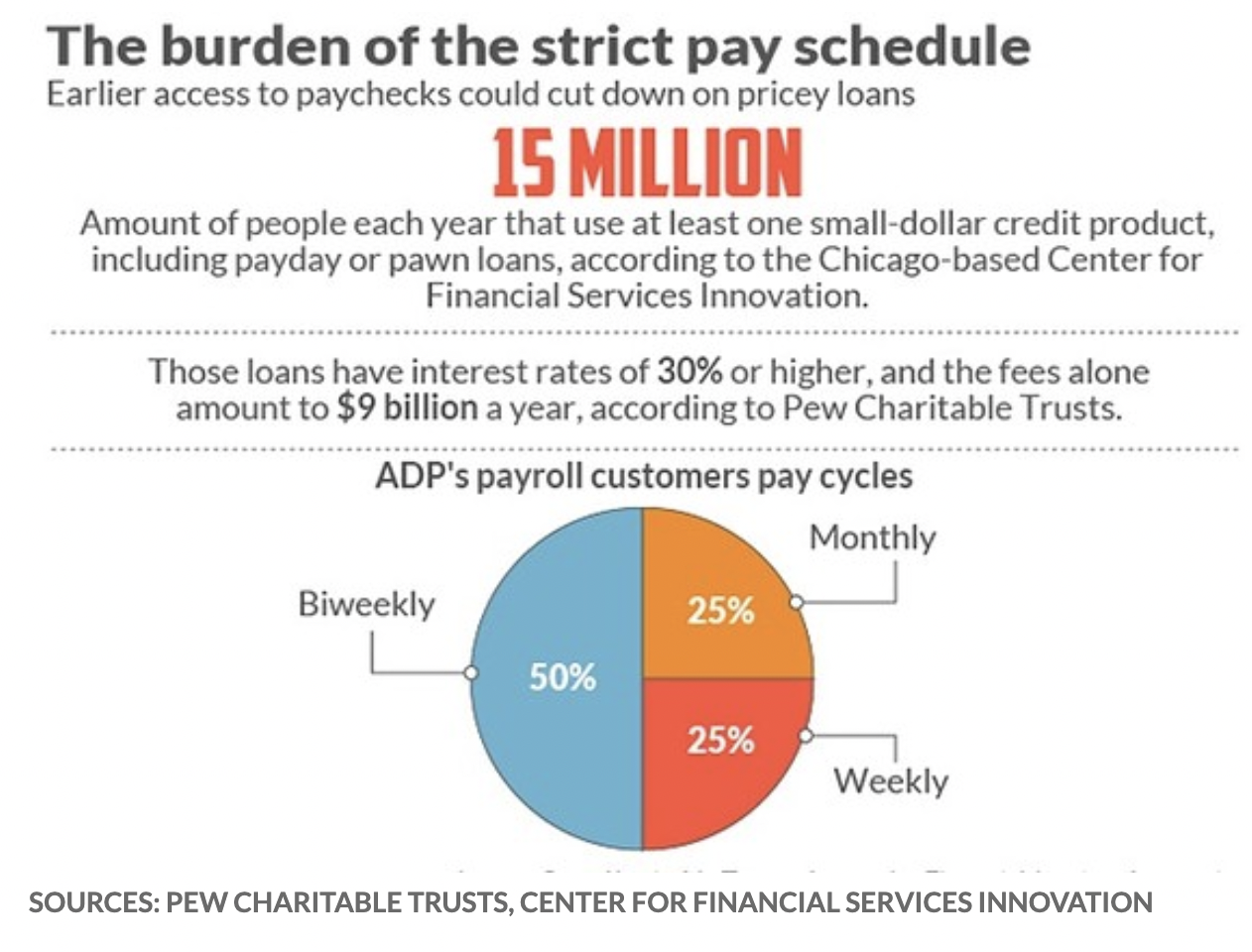 The above photo further reinforces the disruption the wage access system so desperately needs. As outlined previously, the technology enabling DailyPay, and taken to the logic extreme by Superfluid, to provide economic benefits to both the employer and employee are clear and measurable. One added potential benefit is the future in which these technologies drastically reduce, or fully eliminate, the predatory nature of payday loans, pawn services, and unnecessary banking fees that effect so many low income, hourly workers in this country and abroad. Before exploring the impacts programmable streams of value could have on the "real" world, let's examine some protocol use cases that we'll soon see in Superfluid's native ecosystem, crypto. In the article previously referenced (seriously go read it here), Kyle Samani lays out some interesting crypto-specific applications that developers will and/or are using Superfluid for today.

Finally, Kyle succinctly summarizes the lack of immediate value transfer innovation that has plagued the payments industry and reduced the velocity of money saying, "sometimes products and services are paid for 30 or even 90 days after delivery. The lumpiness of these cashflows reduces the rate of turnover of capital throughout the economy. The only reason we accept these arrangements is because of the lack of better technology coupled with the inertia of the past."

While the above use cases are crypto-specific, we can speculate and extrapolate these trends to the potential future impact they could have on everyday life across the world. While examining the potential effects and use cases of a crypto protocol that is less than a year old, still in beta testing, could be seen as a futile exercise, thinking through future applications of developing protocols is where edges are created. Furthermore, the potential change in ~all payments~ if Superfluid reaches escape velocity is so transformational, preparing for drastic changes is necessary as the implications are extremely wide ranging, value additive and difficult to grasp. So, in addition to the crypto-specific use cases outlined above, along with impacts I previously alluded to, here are some things I'm thinking through.

The Future of Value Transfer

Scratching the surface doesn't come close to describing how far away we are from understanding the potential use cases, externalities, and drastic changes that reliable, real-time streams of value would create. These ideas are just beginning to percolate to the edges of the crypto ecosystem which means they are years away from being potentially accepted by the mainstream. While this obviously has a mid to long term horizon and many things need to happen in the interim such as continual expansion and access to smartphones, further internet connectivity growth, digital wallets on every phone, further growth in stablecoin and USDC (US dollar coin) usage, etc. the trend is clear. The composability and arbitrary logic that can be applied to Superfluid streams creates an endless number of ideas and potential use cases that we are just beginning to explore. These ideas and the Superfluid protocol may seem abstract and insane now, but I believe, as evidenced by the current benefits of DailyPay, that Superfluid and the real-time stream of money could represent a true paradigm shift in the way ~all value flows in the future. The network effects of the protocol and positive-sum contribution to every involved participant outlined above provide many benefits including: increasing the employee capital efficiency and creating positive externalities in their financial lives (again, predominately the mid to lower class as an added benefit), providing the employer with increased productivity, higher employee job satisfaction, greater likelihood to hire employees when needed, and a reduction in turnover rate all elude to future adoption of the Superfluid protocol before even speculating on the everyday value-transfer impacts. This results in providing immense value-additive changes to the entire payment ecosystem that we'll see develop over the coming years. The future is so bright.